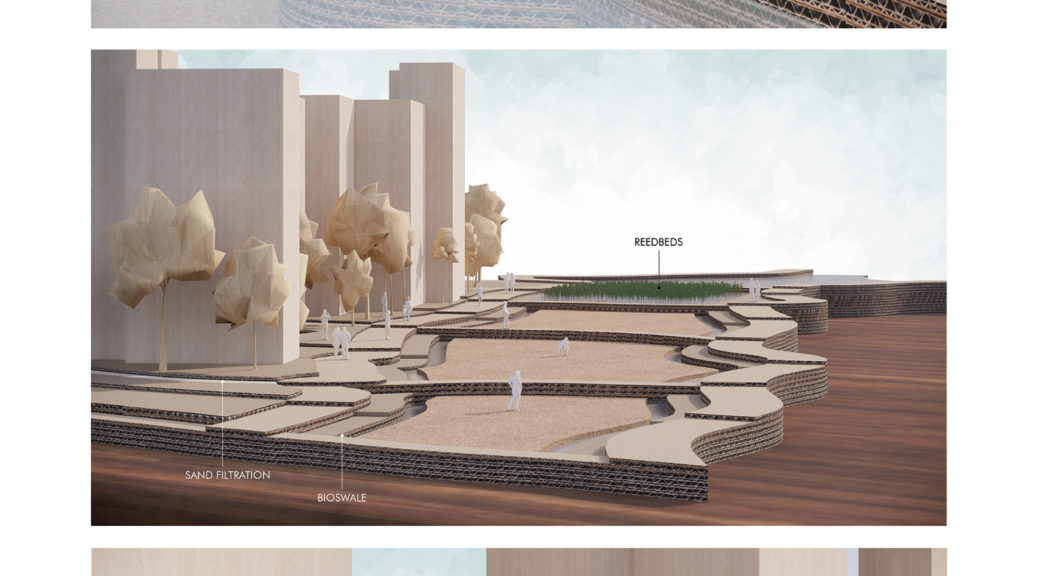 This advanced design studio engaged holistically with Hong Kong’s neglected landscapes heritage through the design of long term scenarios for the valleys of the North East end of the New Territories. By exploring the value of landscape heritage in the distant future, which is unavoidably marked by climate change and a global mass extinction, this studio problematized two forms of contemporary disappearance. First, the loss of historical knowledge and survival strategies which shaped the traditional agrarian landscape and enabled the inhabitants of Hong Kong to live sustainably in the valleys for centuries. Second, the invisibility of the current and future environmental footprint of Hong Kong’s lifeways and the landscapes they generate, both locally and globally. In order to address these issues, students reflected on the following questions through their research, analysis, and design proposals: How can the legacy of abandoned vernacular landscapes in the New Territories become an opportunity to question and rethink the current model of development? What alternatives have already been designed and tested in Hong Kong and globally? And what can be learned from them? What will be the aspirations of future communities and how can they inhabit the land differently? What is the role of landscape architects in designing long term strategies for a sustainable, local, and alternative future? The word “landscape” possesses so many meanings and is open to so much interpretation that it often becomes difficult for landscape architects to define with precision the object and the limits of their interventions, both spatially and disciplinarily. In this stream students are encouraged to approach the making of places through a qualitative and in-depth reading and understanding of landscapes. Indeed, paying careful attention to sites and their many layers (from daily users to history and ecology) generates meaningful design interventions, however radical they might be, which achieve greater precision, balance and relevance. Potential topics include: 1 Landscape as a palimpsest / hypertext 2 The everyday landscape 3 Landscape and memory / identity 4 Landscape as a cultural construction 5 Sense of place / symbolic landscape Students in this stream should expect to become familiar with the work and writings of landscape architects with similar design approach and should identify sites that can be directly experienced and studied. The studio examines the relationships between people and the built environment in the city. Though there are a number of types and conditions of open space within Hong Kong that together construct the public realm, this studio focuses on public space as it is manifested in large public housing estates. The public-rental housing estate is the ‘everyday’ urbanism for nearly 1/3 of Hong Kong’s population. During the heyday of the housing programme, from the mid-1970’s to late 1980’s, these estates were massive and often planned as self-contained cities designed to include a full spectrum of public amenities for modern life. And yet the landscapes of these and other public housing estates are often brutal reminders of how design can fail to serve, or engage with its community. Through a series of exercises, students developped a critique of these designed spaces and formulated their own position on the role of the landscape architect in constructing the public realm. In the first exercise, students analyzed and documented the public realm of public housing in relation to the ‘outside’ forms of public space. Focusing on the estate in particular, they investigated the spatial, ecological and social actors and relationships experienced in a public housing development. In the final project, students developped design strategies to renew a landscape within a public housing estate. As an introduction to the forthcoming five studios of the program, this course aims at equipping students with the fundamental tools of design by achieving three objectives. First, it offers the opportunity to acquire basic knowledge through the understanding of scale, measurements, body and movement. Second, an accumulative series of assignments guide the students through the design process, allowing them to get familiar with its iterative nature. Finally, this studio encourages students to make new links between a wide range of inspirations, acquired knowledge and per-sonal intuition, in order to stimulate their creativity. Students were able to observe, experience and engage in subjective and objective analysis of their sites in order to generate individual design concepts which later translate into small scale spatial designs. The sites selected for this studio are not delimited by a clear perimeter or area but consist of an easily identifiable landscape element: a tree. Throughout the semester, a series of banyan wall trees simultaneously became the sites and the main characters of students’ design outcome. Informed by the pluri-disciplinary study of a tree as a potential design site, the conceptual and textual qualities of the manifesto are used as a tool to generate a design concept. As a creative translation of the design concept into a usable space and based on simple human body movements, simple landscape architecture typologies have been associated with different trees, and assigned to each student. In this first design studio, students based their initial work on their understanding of landscape representation and abstraction previously acquired through first year courses. The design exercise begins with the study of an art piece, as well as the particular philosophy and approach adopted by its artist. Student’s own interpretation of the art piece was illustrated through an abstract painting which in turn set the conceptual framework for the project – an “Open-Air Museum”. In this “Open-Air Museum”, each student was assigned a fixed volume of space, in which to form and construct the topography and space, in order to host the art piece given in the first exercise. The conceptualized forms and shapes of space derived from the ideas of the art piece, or the philosophy of the artist. In this conceptual stage, students generated multiple iterations of concept models, in order to brainstorm a wide range of possibilities and ways of approach design. For each of these iterations, 5 study models were presented at a time, so that feedback and critique helped develop and refine the design. Once the concept is refined, student moved to the spatial design stage, in which they explored various landscape operations to define compositions, datum, proportions, and hierarchies, appropriate for human use and scale. Designs were further articulated through the exploration of landscape qualities. Aspects of how planting and materials will enhance the experience of the space were explored. The understanding of these aspects are then represented in different rendering media such as collage and sketches, so as to prepare students to present their work at final review. The four projects in this studio are sequential, inter-related, and accumulative. They should be conducted with expectation to carry over the knowledge acquired from one project to another. In the contemporary context of identity search and political claims, civil activism for cultural heritage conservation in Hong Kong seems not only to affect architecture, urban forms or language (Cantonese) but also spreads to the environment itself. Indeed, recent shits in the political spectrum of Hong Kong have described its natural resources (ecological and geological) as the source of its uniqueness, used either to support or to oppose its association with the PRC. Initially imported by foreign activists and British politicians during the years of the colonial period, ecological conservation and sustainable development have slowly become government priorities through public reports –such as the Sustainable Development for the 21st Century in Hong Kong (SUSDEV21) or Hong Kong’s 2030 Vision and Strategy– implemented through specific projects such as The Mai Po Nature Reserve (managed by WWF), The Geopark (part of a national geological network) or The Hong Kong Wetland Park (ecological restoration built for educational purposes). but also a general public concern through the increasing media coverage of independent organizations such as WWF, Conservancy Association, Save Our Country Parks or Friends of the Earth. Relying on previous works on urban policy and legal aspects of ecological conservation and sustainable development as well as studies on the social perception and education regarding environmental issues in Hong Kong, this project proposes to understand the roles of various stakeholders: mainly the government but also land owners, activists and the general public. Through the study of a series of more or less controversial case studies –such as parks, villages, agricultural land, infrastructures, etc.– it aims at identifying key issues concerning environmental discourses locally. Situated within the expanding field of landscape studies initiated by J. B. Jackson as well as participating in the elaboration of a local identity, this project mainly consists of writing an environmental history of Hong Kong. By contrast with most of Hong Kong historical research which focuses on political and economic events, it emphasizes on the formation of the place itself through the study of the transformation of geology (quarries and reclamation), flora (botanic exchange, reforestation and agriculture) and fauna by different stakeholders at several periods ranging from pre-colonial to present times through different phases of colonization. Drawing from the pictorial definition of landscapes, this study doesn’t only describe the transformation of the physical appearance of the environment but also recounts an iconographic history of Hong Kong landscapes, revealing the meaning the environment possesses to populations locally and across the empire. The large amount of sources from geographical, ecological, geological and anthropological studies of the territory combined with its relatively restricted size, allow this research to fulfil two objectives. First, in terms of colonial history and following the approach proposed by Robert Peckham, this investigation aims at challenging the idea according to which the colonizer imposes its own culture and values to the colonized population by revealing the negotiation and exchanges at work in the formation of Hong Kong landscapes both physically and in terms of meaning and symbolic values. Second, following the example of symmetrical anthropology, the case study of Hong Kong, with its multicultural population (mostly Chinese and European under specific power dynamics) and its advanced stage of development (hypermodern landscapes), offers the opportunity to question some of the definitions of the concept of landscape such as its role within the modern project redefined by Bruno Latour, including its effectivity in understanding and reading (Sébastien Marot) the environment produced by modernity (suburbs, infrastructure, polluted or ecologically protected landscapes, etc…) as well as its anthropological value in different cultural contexts and at different periods of history in the continuation of Philippe Descola’s work.